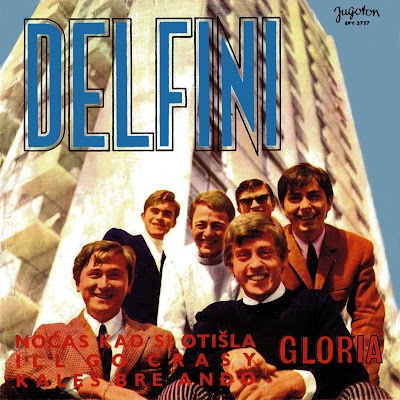 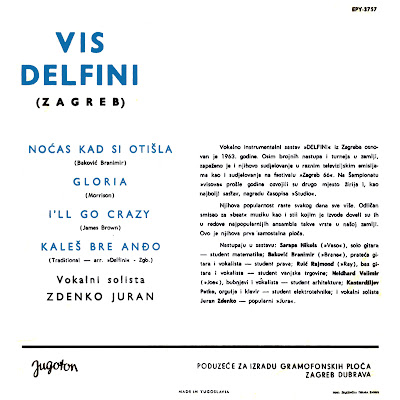 When it comes to 60's, there was thousands of rock'n'roll and garage bands all over Yugoslavia. However, only a very few bands made any records. This is the story of a band which recorded perhaps the most exciting garage rock EP in the 60's. Their name is DELFINI and they come from Zagreb. Several students with a professional singer Zdenko Juran formed Delfini in 1963. They played together for several years until record label Jugoton cut them a deal and published their first EP record. Their energy and creativity especially unleashed in an explosive James Brown cover "I'll Go Crasy". However, the real highlight is an addictive blues version of the Macedonian folk song "Kaleš bre Anđo" , with an amazing keyboard solo by Petko Kantardžijev. Nikola Sarapa also delivered a fine guitar work. Much later in his career, Sarapa had an excellent hard rock band called Stop mostly based on Jimmy Hendrix covers. Unfortunately, the EP was also the end of Delfini's creative period. By the end of 1967 Juran and the bass player Raymond Rujić hired the entire new crew and published their second EP with an inferior musicianship. Still, their song "Bebel" about the French actor Jean Paul Belmondo form their second EP is regarded as a wonderful example of proto-punk. (from blogs.myspace.com)
Objavio/la lajso u 00:51