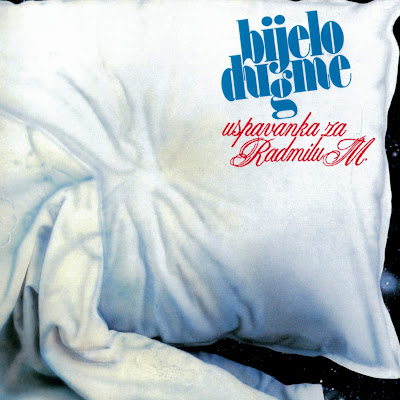 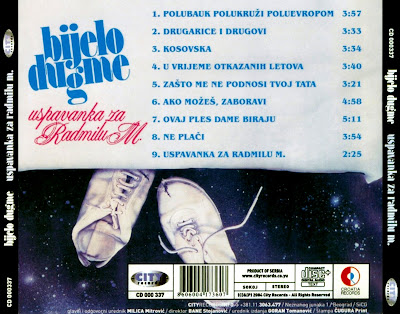 Coming off their New Wave-inspired "Doživjeti stotu" album, which was a radical departure from BIJELO DUGME's original folkish hard rock style, "Uspavanka za Radmilu M." was to be the band's chance for redemption as they decided to make it a lot less New Wave-oriented. And though it had a considerably more favourable initial reception than its predecessor, most still found it to be unfocused and incoherent. Tracks like the opening "Polubauk polukruži poluevropom" and the Lou Reedesque "Ovaj ples dame biraju", both featuring barely intelligible lyrics, were in many circles taken as the defining proof that Goran Bregović was fast becoming a spent author with no new credible ideas. "U vrijeme otkazanih letova" fuses lyrics featuring oriental motifs with the '80s new romantic sound. The band only somewhat sounds like the famous Bijelo dugme of old on "Ako možeš zaboravi" (by far the best known song off the album) and "Zašto me ne podnosi tvoj tata". The album is rounded off by "Ne plači", followed by the instrumental title track. Still, Goran Bregović managed to get the public's attention by having Željko Bebek sing "Kosovska" in Albanian. The fact that this occurred only a year after 1981 Albanian protests in Kosovo made the song a controversial choice. In addition to generating media publicity for the band, "Kosovska" also opened new doors for Bijelo Dugme as they now felt comfortable staging a concert in Priština - something that most other Yugoslav bands at the time stayed away from due to fears of crowd trouble. The track also featured Leb i Sol leader Vlatko Stefanovski on guitar. During its making, Bregović conceptulized "Uspavanka za Radmilu M." as the band's farewell record. He later said: “When we were working on "Uspavanka", we approached it with the intent of making it our final album. Some pieces came together that made it clear to us that it is time to go. I planned on making our Belgrade concert at Sajmište on April 24, 1983 our last, but the entire atmosphere was so good, that we had a change of heart." And while "Uspavanka za Radmilu M." turned out not to be Bijelo dugme's swan song, it was the end of an era in other ways. It was their last album featuring Željko Bebek, founding member who spent the previous decade as the group's lead singer. He officially left in April 1984 to pursue a solo career, following a long period of quiet and open feuding with Bregović, mostly over revenue sharing. It was also the last studio album Bijelo dugme released for Jugoton, as the record label wasn't happy with the band's recent shift towards New Wave, which they thought perciptated a drop in sales. On the other hand, Bregović thought the lack of a proper marketing effort by the label contributed to band's deteriorating popularity. (from wikipedia)