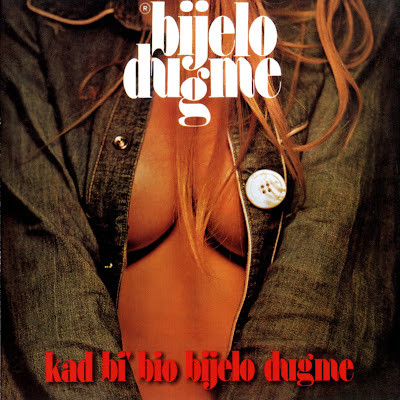 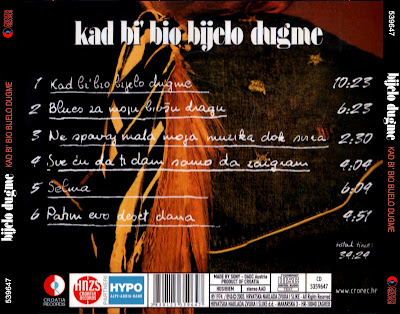 BIJELO DUGME were a highly influential rock band stationed in Sarajevo, Bosnia and Herzegovina, originally when in Yugoslavia. Active between 1974 and 1989, they are considered to have been the most popular band ever to exist in the former Yugoslavia. Founder of the band was Goran Bregović, who spent much of his childhood in a Musical School for violin players, from which he was expelled for “lack of talent”. Soon after his expulsion, his mother bought him a guitar, and thus, Bijelo Dugme was born. Goran Bregović often admitted that his main motivation for forming the band was because “women were more receptive to musicians”. Bregović was the band’s sole composer and wrote most of the lyrics, although some of the most popular Bijelo dugme songs weren’t written by Bregović, for example: "Ima neka tajna veza", "Glavni junak jedne knjige", "Šta bi dao da si na mom mjestu", "Pristao sam biću sve što hoće" were written by Duško Trifunović, "Da sam pekar", "Selma" were written by Vlado Dijak, "Loše vino" by Arsen Dedić etc. After recruiting the band’s first line up, Bijelo dugme under the name Jutro were turned down by Sarajevo based record company Diskoton, but were offered to record a single for another record company, Jugoton. The first single was named "Kad bi’ bio bijelo dugme". After the single was released, Bregović was convinced by the band’s manager to change the band’s name to Bijelo dugme. With charismatic vocalist Željko Bebek, the band soon reached stardom in the former Yugoslavia, as one newspaper put it, they sold more albums then there were record players in Yugoslavia. The pinnacle of the band’s career was 1979’s Bitanga i Princeza, the album is often heralded as their most mature with vocalist Željko Bebek. They were often referred to as the Yugoslav Beatles. The turn of the decade brought the rise of numerous new wave artists, including Azra, and Bijelo dugme soon found their popularity sinking, to which they reacted by reinventing themselves for their 1980 release "Doživjeti stotu", featuring a much more new wave oriented sound. 1984 brought the departure of Željko Bebek to pursue a solo career and Mladen Vojičić - Tifa was recruited to replace him for their 1984 self-titled release. He was booted from the band because of inner conflicts and was replaced by Alen Islamović, formerly vocalist of the heavy metal band Divlje jagode for their last two, folk-inspired records. The band disbanded in 1989 after Alen Islamović checked into a hospital for chest pains during their last tour, without telling anyone he was ill. The real reasons have never been elaborated, but most people suspect the dissolution of Yugoslavia caused the breakup of the band, because the band was often seen as a symbol of unity among the peoples of Yugoslavia. Some of Bijelo dugme’s the most popular songs are: "Selma", "Lipe cvatu", "Đurđevdan", "Ipak poželim neko pismo", "Ima neka tajna veza", "Pristao sam biću sve što hoće, "Loše vino" "Lažeš", "Ne spavaj mala moja muzika dok svira", "Blues za moju bivšu dragu" etc. The band reunited for three concerts in Sarajevo, Zagreb and Belgrade in 2005 with all three vocalists, but without drummer Goran “Ipe” Ivandić who committed suicide in Belgrade, Serbia in 1994. "Kad bi' bio bijelo dugme" is the 1974 debut LP from influential Yugoslav rock group Bijelo Dugme. Together with their second album "Šta bi dao da si na mom mjestu", is considered the most heavy metal driven album of their 16 year career. At the time the band was strongly influenced by popular rock pioneers such as Led Zeppelin and Black Sabbath, together with blues and traditional Balkan music a genre that would be further explored by band leader, chef lyricist and composer Goran Bregović in latter years. (from wikipedia)