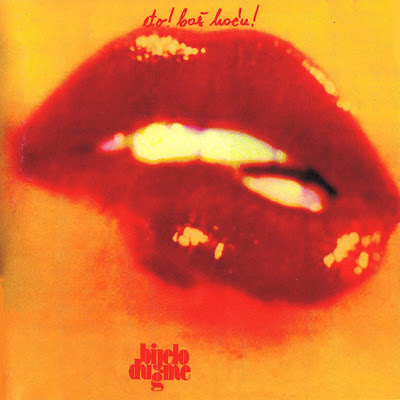 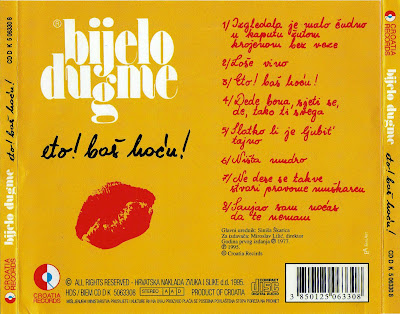 "Eto! Baš hoću!" is the third studio album released by Yugoslav rock band BIJELO DUGME. Album continues Bijelo dugme's early folkish hard rock style, although it is on this album that Goran Bregović began to react to changing trends in rock music (both internationally and domestically) by slowly shedding the band's heavy metal and progressive rock leanings in favor of a more soft rock, consequently paving the way for the band's eventual shifting into 1980s New Wave. Still, "Eto! Baš hoću!" is acknowledged as Bijelo dugme's last, true hard rock album from the early period, together with the 1977 live album "Koncert kod Hajdučke česme". What eventually became "Eto! Baš hoću!" album was created in extremely stressful circumstances. Rehearsals and pre-recording sessions began at Borike village in September 1976. Of the now established lineup that completed the first two albums, only Zoran Redžić was missing since he was away serving the army stint. His replacement on bass was Ljubiša Racić who was with the band since the beginning of the year having played his first show with Bijelo dugme on February 11, 1976 at Belgrade's Pionir Hall during the tour supporting the previous album. The tour lasted through the summer finishing in August and Bregović then decided to quickly record a new album to be in stores by the end of the year since he knew Pravdić would have to go away to the army as he was turning 27 in early December. To that end Bregović booked a studio in London for the month of November and set about writing and practicing the new material on the fly at Borike. In early October both the keyboardist Vlado Pravdić and drummer Ipe Ivandić got unexpected call ups to immediately report for their mandatory army stints by October 13, 1976 in Čačak and Belgrade, respectively, which meant that Bregović suddenly had to find two new members on a very short notice. For the drummer spot, he right away turned to old bandmate Milić Vukašinović who quickly accepted, but getting a new keyboardist was not as smooth. Bregović wanted Laza Ristovski, playing with Smak at the time, who in addition to being uneasy about leaving his band also felt apprehensive about fitting into Bijelo dugme setup that was much different both creatively and organizationally from what he was used to with Smak. Ristovski finally decided to give it a shot, and after some initial difficulties, eventually stayed on. His arrival got major attention in Yugoslav media that covered it like a bigtime football transfer. Dissatisfied with the way things are going on organizational front generally, Bregović also sacked the band's manager Grada Veljković and brought Raka Marić in his place. The album was originally supposed to be called "Sve se dijeli na dvoje, na moje i tvoje", but despite trying very hard, Bregović wasn't able to come up with a satisfactory melody to a Duško Trifunović-written poem from which the above lyric is taken, so the whole the idea was abandoned. The next suggestion for the album title was "Hoću bar jednom da budem blesav!" which the people at record label "Jugoton" didn't like, so finally right before departing for London "Eto! Baš hoću!" was agreed on as sort of a compromise. Since Racić was just a replacement until Redžić gets back from the army, the band did not take him to London, so Bebek ended up playing the bass on the album. Once the recording sessions began at Air Studios, a new problem arose - the band featuring two new members (Ristovski and Vukašinović) versus two returning ones (Bregović and Bebek) sounded much different from how Bregović envisioned this album should sound. Still, by the end of their time in London most things fell into place and the album was released back home on December 20, 1976. Upon coming back to Sarajevo the preparations for the tour to begin in February 1977 started. That brought about more personnel issues, however, as bassist Ljubiša Racić asked for more money, but instead of giving him a raise, Bregović fired him. Bregović and manager Marić turned to looking for a replacement, picking up Sanin Karić. (from wikipedia)